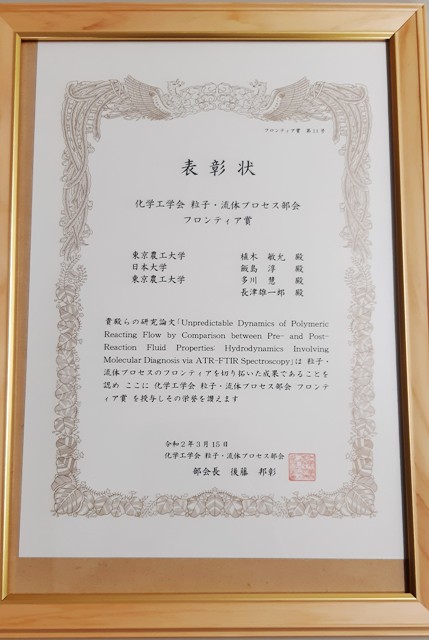 Associate Professor of GIR, Yuichiro Nagatsu received the “Frontier Award of the 2019 in Fluid and Particle and Processing Division” from The Society of Chemical Engineers, Japan (SCEJ) on March 15, 2020.

Paper content: It has been conventionally common knowledge that the dynamics of polymeric reacting flow are predictable by comparison between pre- and post-reaction fluid properties. However, in this paper, Associate Professor Yuichiro Nagatsu and his team discovered there is polymeric fluid reacting flow which cannot be predicted only by comparing pre- and post-reaction fluid properties. From their research, the viscoelasticity was remarkably increased temporarily although the viscosity of the liquid was slightly decreased by the reaction. In order to elucidate this reacting mechanism, they challenged infrared spectroscopic measurement of an ultra-low concentrated, ultra-high molecular weighted polymer aqueous solution, and succeeded in this by applying the ATR-FTIR method. This study is the first demonstration of the existence of a polymeric fluid reacting flow that requires elucidation of microscopic molecular structure changes to understand the macroscopic flow. This achievement is remarkable not only for the industrial applications such as in the proposal of a new reacting design framework and the creation of a new rheology control method; but also one with extremely high pioneering value that can lead to the creation of a new academic field which may be named, “reactive fluid dynamics for examining molecules”.

One of the peer reviewers of this paper is ranked top 10% of importance whose paper was featured on the journal as a “supplementary cover”. This research was also press-released by the affiliated organization and featured in electronic versions of multiple media both in Japan and overseas.

This award is given to the author of an outstanding research paper with particularly high pioneering value among the papers published in peer reviewed proceedings in international conferences and those published in academic journals around the world related to the field of fluid and particle and processing division of chemical engineering. The award is given to authors of papers who are members of SCEJ.